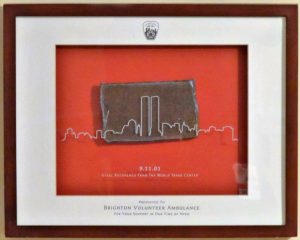 In 2001, BVA received a historic mutual aid request following the 9-11 terrorist attacks in New York City. We sent an Advanced Life Support ambulance, 6 EMTs and Paramedics, 15 cases of medical supplies, and our K9 Search and Recovery team to help with the horrific recovery efforts. As an expression of thanks, the NYFD sent BVA a service commendation and a shadow box containing a piece of steel salvaged from Ground Zero.

When BVA learned that the Lindenwood Volunteer Ambulance Corps in Queens, NY lost one of its two ambulances when they responded to the World Trade Center, our Board of Directors voted to donate an old ambulance to them so they could continue to serve their community of ~40,000 residents.

Months later when the names of those lost in the Twin Towers’ collapse became available, BVA sadly discovered that one of our former members, Zhe “Zack” Zeng, was killed while voluntarily performing first aid at the scene. Media reports credited him with saving two NYFD firefighters. Read Zack’s Heroic Story.